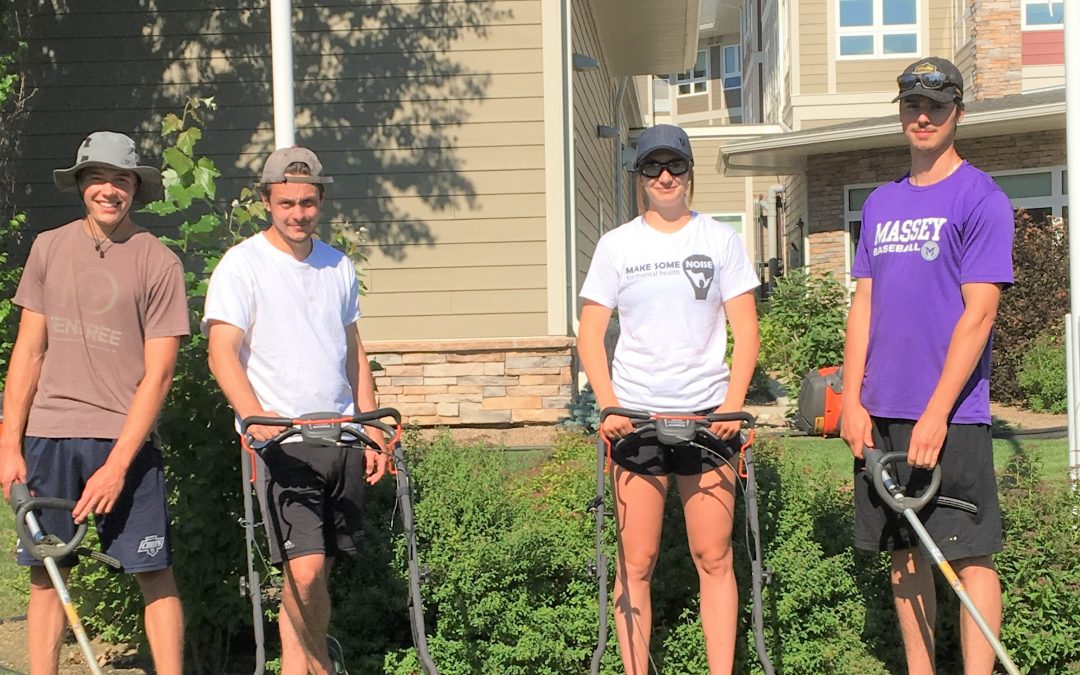 With high school graduations coming up, and college and university students already done for the summer.  It is time to look at the benefits of hiring students.  VHP has hired students off and on since it’s inception in 1997, however in 2012 the company started a seasonal lawn crew consisting of students & athletes home for the summer.

These students bring a bit of life and a different perspective to the business each year.  We have had some students back as many as five years in a row and have offered them different opportunities for advancement within the organization.

It is really rewarding to see these kids grow up into responsible adults developing a work ethic and progressing into their careers.  Brock Sutherland was the first member of the lawn crew back in 2012, he was joined by Cory Rae and Cole McCaig.  It is amazing how time flies, both Cory and Brock have their own families now and all three members have moved on to very successful careers.

With the energy comes fun.  Since the first year of the lawn crew VHP has hosted staff Bar-be-ques to bring the team together to build appreciation for the hard work of all team members.  This has evolved into entering a staff hockey team into the Wendy’s Summer Hockey League where the students and other employees can have some fun outside of work.

Finally, in 2016 a tradition started called the “Jake Cup”, named after VHP’s founder Vionell Bertineous (Jake) Jacobson who was an entrepreneur and a competitive guy.  The Jake Cup which started as a fun hockey game at the end of the summer where staff members could invite their friends out and have a challenge game for the Jake Cup.  Last year this evolved into an event where VHP and RE/MAX Valleyview Realty would team up to play against Royal Lepage Martin Liberty Realty.  This provided an opportunity to bring the competition level up a bit, add a bit of pride to the event, but to also help two local charities, as the losing team donated $500 to the winning team’s charity of choice.  50/50 proceeds were also donated to the charity of losing team.  Last year Career Connections and the YWCA shared over $800.

This year’s event is planned for August 15th at a location to be named in the near future.  VHP and RE/MAX Valleyview Realty will be looking to win the Jake Cup back from Royal Lepage Martin Liberty Realty.  Looking forward to seeing people come out to support a couple of local charities again this year.

All of these great things: Friday barbeques, the Jake Cup and the summer hockey team were started because VHP decided to hire a group of students back in 2012, not to mention having the best kept grounds in the city for our apartment complexes.  When considering adding a student to your team this summer, don’t think of the costs; think of the benefits of providing employment for young people and what they bring to your organization.

VHP has committed to constructing 128 multifamily residential units in Portage la Prairie the first 64 units will be ready for occupancy in fall of 2019.

Post by Jason Roblin. Find him on LinkedIn here!